View in legacy (desktop) mode
Everyone wants to know about Zelda, right? How it plays, how it looks, what's the story, what's new about its structure that Aonuma was teasing last November. Well, two and a fraction out of four ain't bad... 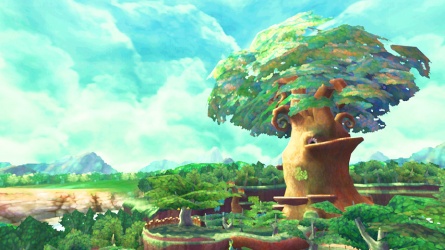 On display at Nintendo's booth this year was a demo of The Legend of Zelda: Skyward Sword. But it didn't really seem like it was taken from the game-in-progress itself so much (like past demos have been) as created to be a sandbox specifically tailored to show off all the new moves Link has; most of it is based around the added capabilities the Wii MotionPlus accessory gives to the Wii Remote.


The look
We did get to see the new watercolor style Nintendo's going for this game. However, we noted that while the screenshots you see here and elsewhere around the Internet show it off really well, we just plain didn't see a lot of this going on in the demo itself. Whether it was the fault of the TVs in use or the demo itself wasn't yet sporting full graphical effects, Link and his foes appeared much more flat-shaded, like a high-res Ocarina of Time than anything else—though you could see the look represented quite well in the ground and the tops of trees. This really hit home when we picked up a show daily with Link on the front and asked nobody in particular, "where was this Link on the floor yesterday?"

It was still quite colorful, though, with a classic palette taking the place of the browns of Twilight Princess, for which we're grateful. Maybe some tweaking will bring the effects we like so much out more as the game comes closer to release. 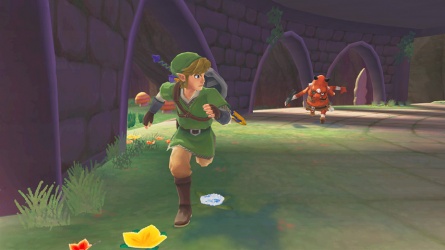 Movement
If you've played any 3D Legend of Zelda game, you're already familiar with the basics here. Run around with the analog stick on the Nunchuk, and hold Z to lock on to an enemy and begin strafing around him. You can also tap Z to center the camera behind you; there was no manual camera control. If a first-person look was available, we unfortunately didn't find it. (A quick Google search seems to suggest nobody else did, either.)

Link also has a new move, the dash. Holding A while moving will let Link run quickly and run up steep slopes, but this power is limited, as you'll see by the circular stamina meter that appears behind him while you're using this power. Run out, and Link gets out-of-breath and vulnerable. The same meter appears when you're climbing vines, as well, limiting that activity for the first time in the series. We're looking forward to seeing what sorts of terrain designs they can come up with using this mechanic.

We were also curious to see if there was any other kind of movement in the game, but Nintendo's keeping mum on that—Link had only his own two feet to rely on in the demo. No horse, transformation, or boat made an appearance. 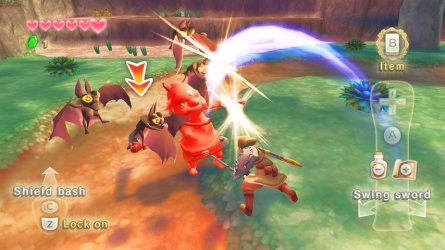 Shielding yourself
One move that we didn't think worked out so well was the use of the Nunchuk to raise Link's shield. Literally, you seemed to have to raise your Nunchuk hand to do this, but it seemed sort of random whether the shield would be up or not. It didn't automatically come up when you locked on.

But, working much better, the shield bash move from Twilight Princess returns, and it functions almost exactly the same—give the Nunchuk a thrust forward to execute the move—only now, it's more useful, being required for defeating Deku Scrubs by deflecting their Deku Nuts at exactly the right time. You can also, we were told by a demonstrator, use the shield bash when the Stalfos boss strikes to stun him; however, this proved really tricky to pull off, so we haven't seen it in action.
view full archive