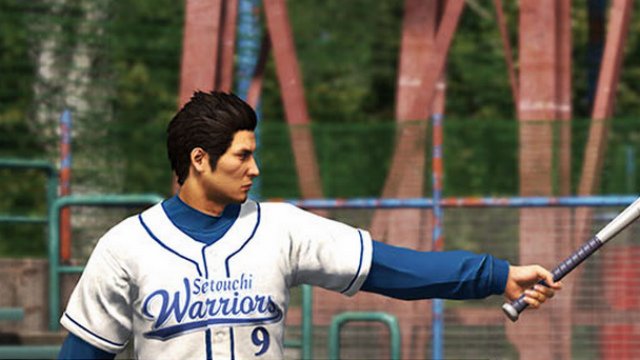 My daughter is literally two weeks old, I put her in a bassinet next to me, it is a word I just learned, it's a basket on wheels that you put your fresh baby in because they are fragile and important and about as mobile as a zucchini. All I want, for the love of god, is to get an hour or so of time that is unpunctuated with shocking emissions of any sort, from the ass, mouth, or butt.

That's because I have decided that babies are boring, but setting my virtual baseball team to double-speed autopilot and watching their statistics simulate an inconsequential game so that I might win a modicum of also virtual and Very Inconsequential experience points for the baseball players (also not real) over and over again is exciting? Comfortable, at least.

These are early mornings, ones that seem more distant in history now than it's easy to explain, days removed from a human being blasting out of my life partner, as we are now left to our own devices—here is a person who can't do anything and who will require your absolute care every three hours At The Least, and okay you can load her up in your car and take her home like a sack of groceries now, ha ha good luck, the speed limit is 70. I cannot envision a life that exists for me outside of the present moment, one free from the confines of tending to the the world's weakest bonfire.

Unfortunately I also just got a copy of Yakuza 6. It is playable on the video game system that you can't take away from the TV.

And speaking of Yakuza 6, have you seen this mother fucker in it? I fire it up all excited and here is super-stud Kazuma Kiryu, having apparently accomplished all there was for him to do from Yakuzas 0 through 5, who now finds himself saddled with the last bastion of contrived game devices. Yes, it's time for you to simulate with a video game the exciting fantasy-task of taking care of an honest to goodness Baby Human, the progeny of your pseudo-adopted daughter Haruka who you once took care of at an orphanage in Okinawa in Yakuza 3 so that Sega could model some other place aside from Tokyo again. This is what I was looking for, a game where I can take care of a baby. Ah yes, sweet escape.

But it's kind of a big load of bullshit, because almost as soon as they introduce the baby (named Haruto), they start coming up with ways for you to, ya know, not have to deal with this goddamned intrusion, cause you can't do shit when you're responsible for a baby! Every time you get accosted by six rowdy street thugs, a thing that happens in life, you see a little cutscene of you handing the baby to a complete fuckin' stranger—an animal, perhaps, with the taste only for baby meat—while the street thugs hang around waiting for you do it and then charge to their deaths. I'm level like, 20 something guys, jesus christ just gimme your energy drinks or whatever it is so I don't need to literally impale you with the pocket knives I wrested from your goddamned hands (I also broke the hands). While you have the baby you cannot run, only walk, this is also a lie because they do not model how Kiryu should need to be not only walking but sauntering, perhaps jauntily, maybe saying "shhhh, shhhh, shhhh" in a (futile) effort to prevent the baby from losing its mind, just absolutely roiled. 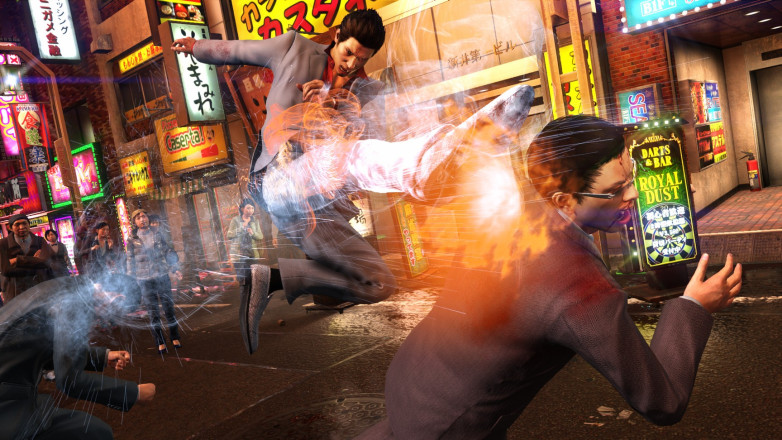 Later in the game you end up in some other city far from home, again inexplicably with the baby, who this towering monolith thinks he can somehow take care of, tucked into one arm, never making a fuss, never cranky with a light brown stain, spreading, on the back of his onesie, as the liquid hate squirms free of its post-consumer prison and up the crook of his back.

They make you even do a series of stupid mini games during this part with the baby, where a giant gaudy neon alert swoops in from the side of the screen with your newest Video Game Goal, and it is to SOOTHE HARUTO! The game grinds to a screeching halt while you are tasked with performing one of four possible Dual Shock Four motion commands in the middle of the street while traffic waits that allow you to sway, lift, rock, or do some other things to the baby that, yeah right, will calm the baby down for a while after you fill its Calm Meter, a thing babies have. It is roughly as realistic but nowhere near as enjoyable as the unlockable finishing move you can perform if you manage to grab a staggered enemy near a convenience store then pull him inside to the counter, where you slide him over it and smash his head into the microwave before tossing a witty quip to the terrified clerk—"heat this garbage up for me will ya"—and then the clerk turns on the microwave and actually fucking murders the guy by pressing Start like heating up a bento, oh this is fine, I am microwaving someone's brain, all in a day's work at minimum wage. Sometimes I do it to two or three guys in a row and imagine the clerk just shivering in the corner for a while and then he shows up the next day like nothing is wrong, hey remember yesterday when I microwaved a few guys, welp there are more little pork buns to put into the steamer. 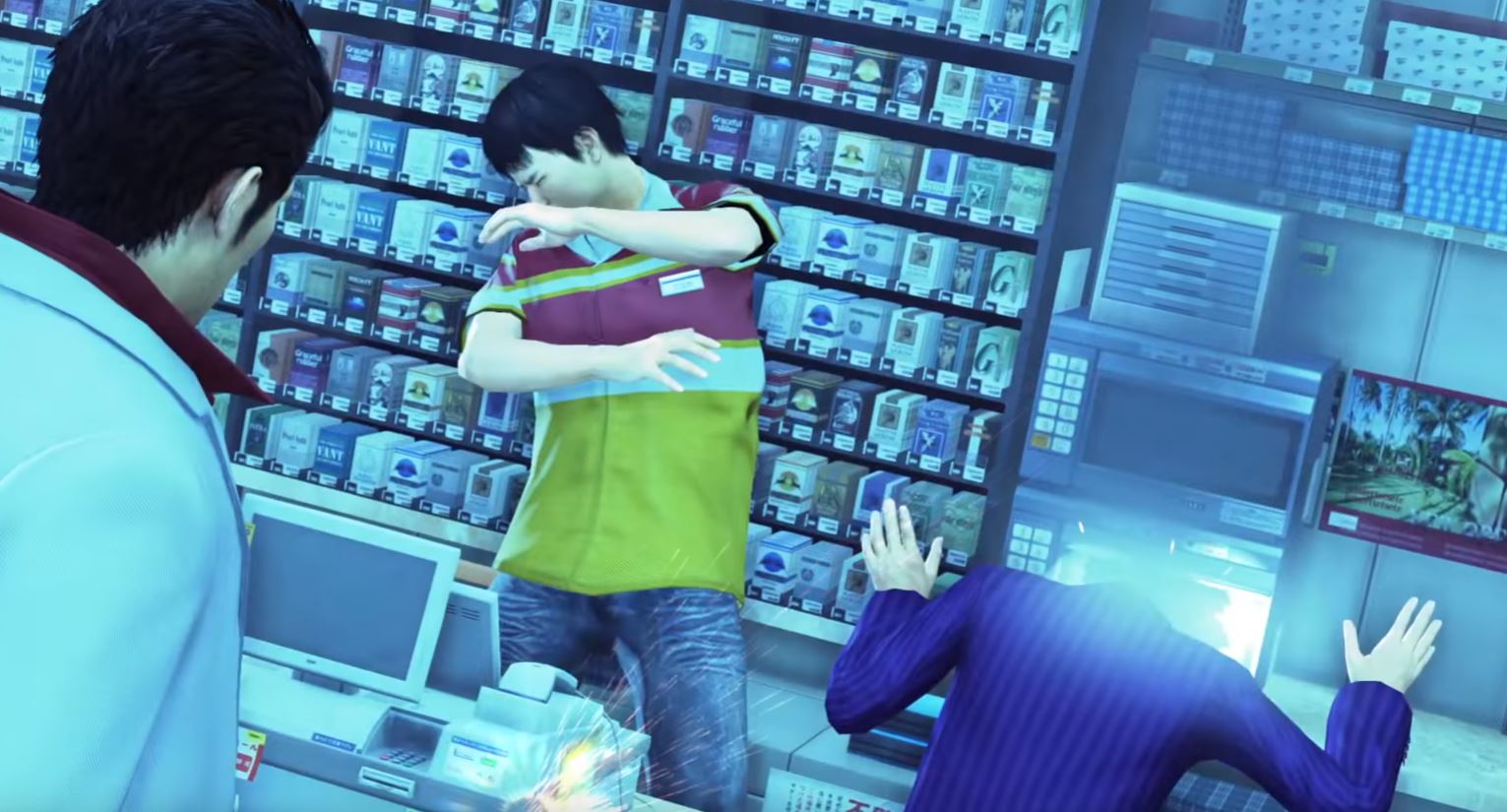 After fighting and probably killing no less than 150 men during a period of wild and rampant "exploration" when I am surely supposed to be doing something else that is very time sensitive and urgent, Kiryu realizes he needs to feed the baby, and of course his idea is to go get an onigiri for it (translator's note: onigiri means not baby food). In a game where I can dress like a city mascot with an orange for a head and go deep sea fishing with a spear gun in an on-rails shooter where I slaughter sealife mercilessly for points, I am freshly triggered by the thought that this man has continued to flit about his life unburdened, unconcerned, while the baby starves to fucking death, la de da. Other people in the game have been like, no Kiryu, leave the child with the protective services, and he is like no man, I gotta do this, I will fight you and kill you so I can take the baby with me. He does not own a diaper bag, or a diaper, he has clearly never in his life fed a baby before despite having owned and operated—retrospectively now in an absolutely unqualified manner—an orphanage for children, he never has to change his beautiful silk shirt, caked with hot small curd cottage cheese fresh from the fuckin' tap like a misused Mr. Bucket.

And yet, these idle machinations bring me tidings of great joy: I get points, tiny bars get slightly longer, I obtain brightly colored jockey shorts, the little goals get checked off. I am praised for eating every item off the menu at each restaurant in the game, such an absurd mount to summit that I cannot help but march Kiryu to five restaurants in a row, hogging down everything in sight. I obtain a skill that allows me to "digest food faster" so that I can eat more, which seems counterproductive to how human life works. I am rewarded for ceaselessly chugging bizarre drinks from vending machines, for joining a live sex chat at the Internet cafe, for playing Virtua Fighter, for beating real life darts player Paul Lim at cricket after drinking 12 glasses of scotch (also was rewarded for drinking the scotch). I accomplish tasks by merely walking a lot, when I feed random cats on the street, I am Getting Things Done as I train, yes, my virtual baseball team to destroy rival baseball teams in games I am not actually allowed to play but continue to participate in anyway. I am crossing off things from my to do list in the game as my yard in real life is neglected, as I beat myself up for lapsing in my own creative work, as I pick up and put down books, as these spare hours get harder to find. 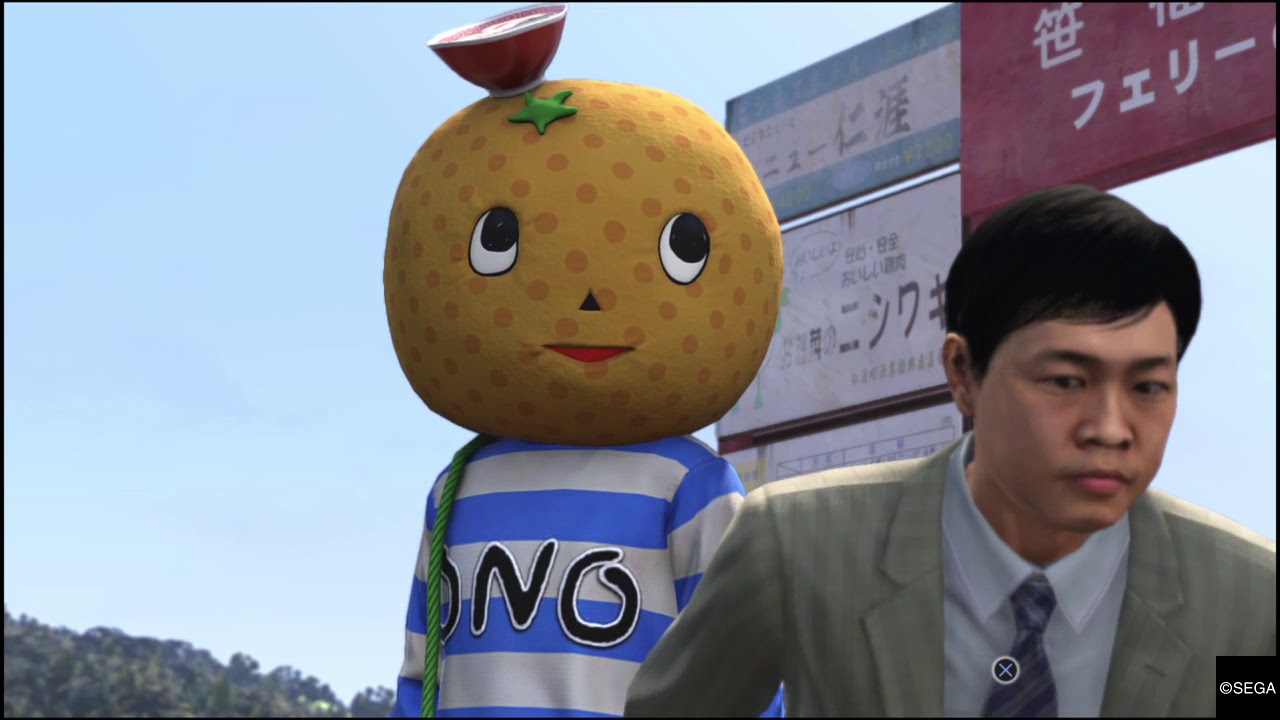 And it's not just this game, it's any game, it's this energized, emphatic push to get the baby taken care of so that i'm "free" again, so that I can do, something, things I wished I was doing and wasn't doing even before I had the baby, a period of potential energy, all possibility, as though it's of greater value than anything that would come of it. It's ignoring the fact that I have Kiryu's buddy waiting outside a club for me somewhere to go talk to some guy, but instead I want to eat at restaurants for 36 hours and then go sing karaoke with girls I spent 400,000 yen on at the hostess club. Anything but the thing I have to do, anything but the thing that I know will get me where I have to go, where I want to go, to the goddamned credits, anywhere.

At times, as I beat on enemies more slowly so that I can fully enjoy each agonizing blow's deep rumble from my subwoofer before I kill them too fast since I'm massively overleveled, I evaluate my own life in the way that only the deeply uncertain do, making negatives out of my positives, analyzing the reasons for my actions, attempting to convince myself I am not just going through the motions, not driven solely by a ceaseless effort to relive the experience of memories I have from the past, from times where the thing I am still doing was the thing that used to make me feel the best.

Why my single-minded interest in this amusement, obtaining my brief respite from "the baby," either real or virtual, only to achieve something that isn't much of an achievement? To obtain time that is used to do nothing of any real significance? I have to hand Haruto off to strangers, to wheel my daughter back here, to hope they stay asleep, feeling like an asshole—good, good, you are at your most enjoyable to me when you are essentially unconscious—so I can what, sink Many Hours into my pursuit of a completion percentage reflective of essentially the number of those Many Hours that I managed to devote to it, to obtain a non-existent currency, to microwave people. 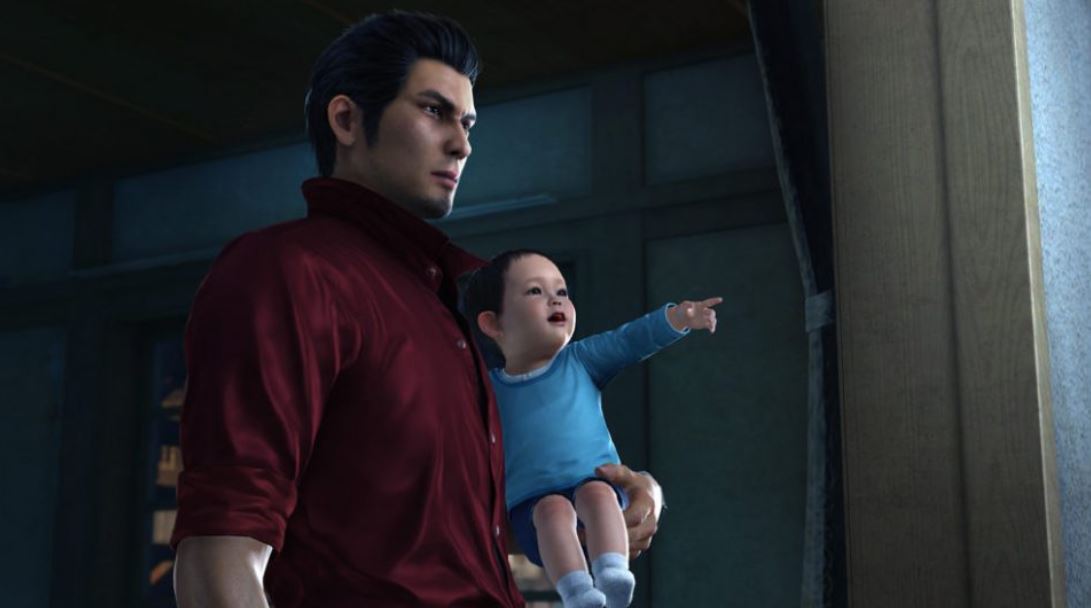 Sometimes I get her to go to sleep, strapped around me like my mom's arms, swaying side to side, in search of this defined goal like so many of the other ones, SOOTHE HARUTO, returning her to la la land, unsure of what is supposed to come after it. In my house on my street I have no area thugs to fight, no restaurants to eat out of business, no batting centers to visit. She sleeps and I think now, what I could do with this freedom, this oyster of a world, and I just stand there, and I wrap my arms all the way around her like I am crossing them in front of me to keep everything else out and it feels like the opposite, and I think maybe this is the thing, maybe it's okay for it to be the thing.