I can imagine it now: on April 12, 1991, Hiroyuki Hashimoto is drunk after a long cherry blossom viewing party with his new coworkers, who he pretends to like. He wasn't a good student but he was chosen by this company, so he's stuck here for better or worse. He could have been something more, but couldn't we all have? His duty is clear. With his first paycheck he has deigns on purchasing a new Super Famicom with some of this month's earnings, and he aches for Actraiser, Final Fight, and the upcoming SimCity, all components of the system's strong launch lineup. He already has the money in his pocket. He flirts with the girl from across the row as they sit together on a blue tarp, eating skewers of grilled chicken hearts and drinking cheap wine.

But, stumbling back to the station after his pleasant sojourn in the park, he feels invigorated, empowered. He feels almost like he used to, not so many years ago, when he was in college, when the bubble economy was pulsing, when he was seeing Akira in the theaters and Hirohito was dying. He feels virile, lusty! "How can I feel like I'm back in those days," he mutters to himself, fumbling with the convenience store receipt folded up in his pocket. He stops into the local game store and looks at the case, full of fresh Super Famicom games. "Too modern, too relentless," he thinks, these symbols of progress, of the endless march forward. Today is not the day for a Super Famicom.

He goes to the original Famicom section, the taste of grilled meats still on his fingertips and the late 80s in his mind. And then, like a beacon in front of him, the game appears. In this game he can control all of Japan, he can become what he never was—a resounding success. He doesn't need the Super Famicom, he needs a puzzle game. He needs a puzzle game based on the twilight years of the USSR. He needs a game where he can play the role of Mikhail Gorbechev and attempt to build an oil pipeline connecting Tokyo to Moscow so he can exert his powerful Soviet influence in Japan. He needs Gorby's Great Pipeline Operation!

Twenty-three years later, dejected after his lifetime of servitude to the company he little cares for, he strikes out on his own, parting with his most treasured possessions. Also Gorby's Great Pipeline Operation, which he sells to me on Yahoo Auctions for roughly four dollars. It is in virtually mint condition, the markings on the circuit board point toward it having been inserted into the Famicom a single time.

Gorby's Great Pipeline Operation is more or less a clone of Tetris, only instead of any old line being a good one, you need to bridge pipe ends on the right side with pipe openings on the left side, ensuring continuous flows of Mysterious Liquid. Each piece is the same size, but contains different pipe segments, which break apart like in Tetris 2 or the pills in Dr. Mario if you hang them over an edge. Perhaps more remarkable than the game itself is the music, which is as close as you can get to Tetris as possible. That is to say that the game's music is essentially the same old folksongs.

But the best part of this game is the caricature of Mikhail Gorbachev on the box. It even accurately depicts his huge and wild/crazy head-based birthmark spot! In the background you can see a Space Shuttle inexplicably blasting off from sort of the Moscow area. I assume it is one of the Buran program shuttles, a program which is notable for having launched a single unmanned orbital spaceflight in 1988?

But what is up with this game though, seriously. Can you imagine choosing this thing back in the day over all the other great stuff that was coming out at exactly the same time (Little Nemo, Teenage Mutant Ninja Turtles II, and Double Dragon III, to name a few) and paying the ludicrous price of 4900 yen, a price which is actually printed on the box? 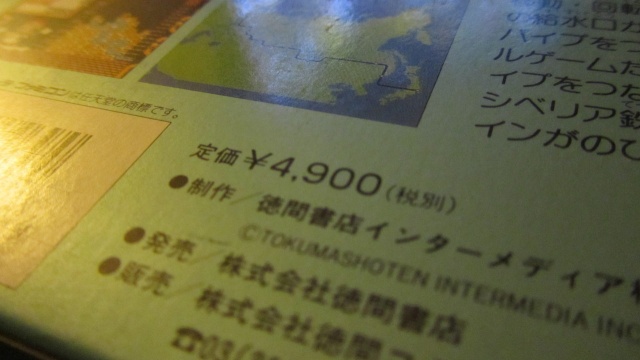 I kinda wonder how games like this would do in the modern gaming environment. I imagine a full-price disc release of Yukio Hatoyama's Sun-Eating Wife Adventures or Mitt Romney's Munny Madness or Rod Blagojevich: Corruption Raider. Would you buy these games? Wait, don't answer that.

I hope that Mr. Hashimoto, wherever he is, had a grand old time with Mr. Gorbachev on that fine April evening. Tonight, though, Mikhail is all mine. Oh yes, oh. Mmm, oh my word.