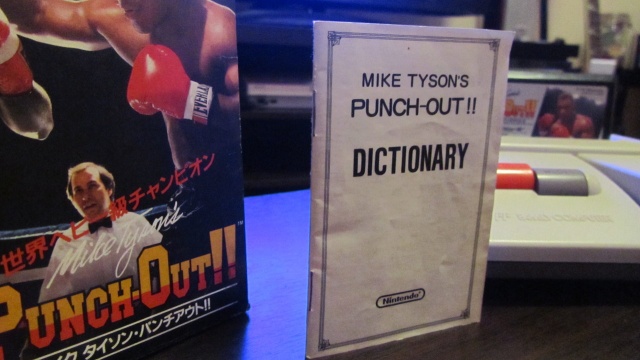 If your childhood was anything like mine, you were rarely a stranger to a variety of bizarre schoolyard ramblings and rumors when it came to Mike Tyson's Punch-Out!! I remember hearing that Mike Tyson was literally unbeatable, that some boxers could get knocked out of the ring completely if you used the star punch at the right time, and that pressing certain sequences of buttons could charge up your health even after you'd already used the select button trick between rounds. That is to say nothing of the rumors regarding Mike Tyson himself, which it seemed every other kid had come to know with veritable certainty through "my uncle who works at Nintendo." The most popular seemed to be that he was unceremoniously ousted in later versions of the game (when Mike Tyson's Punch-Out!! became just regular old Punch-Out!!) because of his rape accusations, but I also heard it was just cause his contract expired and he wanted too much money to be re-signed. My favorite one was that they canned him because he wasn't undefeated anymore after dropping that sad one to Buster Douglas. Though the real reason was probably a combination of all those things, we'll probably never know the full truth.

One rumor I used to often hear was that, due to Nintendo of America's censorship policies, the game was more toned down in the US than in Japan. I had a friend that insisted that in the Japanese release, Soda Popinski was actually called Vodka Drunkenski, like he was in the arcade version, something I had long considered plausible if only due to the ridiculousness of his in-game quotes saying he loved to "drink soda" before a fight, coupled with his other blatant Soviet stereotypical traits like being able to tolerate cold weather, his entrance music, and his red color scheme. I also long figured that the racial caricature Piston Honda likely spouted something more intelligent than bizarre, incongruous Japanese snippets in the Japanese release. But then I picked up a Japanese copy of Mike Tyson's Punch-Out!! last week, and wouldn't you know it, it's exactly the same as the US version! In fact... everything is the same. The game's ROM data is literally 100% identical, straight down to the English mid-fight banter. And that's where the Mike Tyson's Punch-Out!! Dictionary comes in...

You think you had it rough with EASTMOST PENNINSULA IS THE SECRET, try putting yourself in the shoes of Japanese gamers in the Famicom era, where many games just plain used English instead of Japanese, regardless of whether it was even understandable by native speakers, let alone the kids of Japan reading it. In the case of Mike Tyson's Punch-Out!!, instead of actually spending time translating the game from English (the language it was originally designed around, as it was assumed it would be popular in America but not Japan), they just screencapped every section of in-bout text, arranged them alphabetically in two sections (things from Doc and Mac, things from opponents), and then stuck them into a little booklet included with the game, translations for each phrase printed next to them.

What the heck! The first page of the booklet says that during the game you will see "interesting English phrases" and even mentions something like you can use the phrases as a sort of English study and imitate them in school, which is a horrifying thought. I can imagine some kid running up to me and yelling WELCOME TO DREAMLAND, BABY! 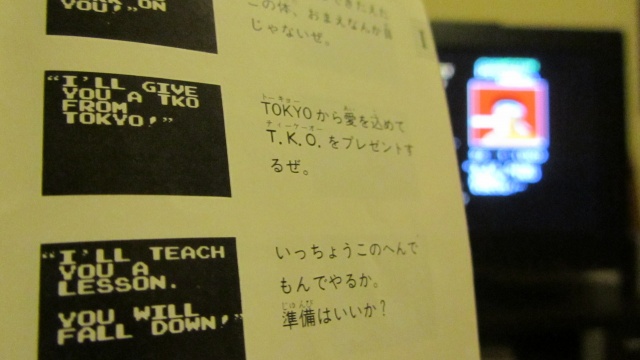 One of the neat parts of this little dictionary is that many of the phrases aren't really translated all that faithfully. The English in-game quotes use a surprising amount of trash-talk and slang that I'm guessing either the Japanese writers didn't know how to translate or just decided to gloss over. The one I looked at first was the one I was most curious about, which in English is "sushi, kamikaze, Fujiyama, Nippon ichi..." It gets translated as "Japanese specialties—sushi, kamikaze, Fujiyama... I'm Japan's number one man!" A few quotes just change the meaning. One phrase, which in English reads "Hey! Mr. Referee Mario... I like your hair!" gets translated as "Hey, Mr. Mario. That hat you got there, where'd you buy it?" Some of them even change the joke entirely, mostly due to slang nuance. For instance, "I don't smoke... but tonight I'm gonna smoke you!" becomes "I've stopped smoking. And now I'll stop you from boxing!"

Another interesting thing is that some of the translations have little translator's notes. One of them explains "the Sandman," since it's a cultural figure that Japanese people generally aren't familiar with, especially in its context of giving Mac "sweet dreams." Another one that kinda blew my mind was Don Flamenco's quote where he says "Flamenco strikes back!! Return of Don!!" The translation is pretty literal, but then there's a translator's note in parentheses: "(Does this remind you of Star Wars?)" Somehow I had never picked up on the connection with The Empire Strikes Back and Return of the Jedi.

Of course, one of the coolest parts about Mike Tyson's Punch-Out!! is that for all the years of endless speculation, very few of our childhood rumors have answers, and we're still learning new things all the time. Nintendo has been famously secretive about Punch-Out!!, and most of the things we now know about the game have only been accumulated over the years of combined play from gamers everywhere. Nintendo themselves only mentioned Punch-Out!! strategies a couple of times in their own Nintendo Power magazines or newsletters, usually just a couple basic tips and a few passwords. Even just recently, Punch-Out!! designer Makoto Wada finally revealed in an installment of Iwata Asks that in addition to plenty of other hidden tricks, the real secret to beating Bald Bull during his bull charge is to just watch for a tiny camera flash on the right side of the ring and hit the button at that moment to knock him down. I tried it, it works! Can you imagine how famous we'd have been on the schoolyard if anyone had figured that out? The wealth of hidden secrets only adds to the game's longevity. Who knows what we'll be hearing about another twenty years from now?