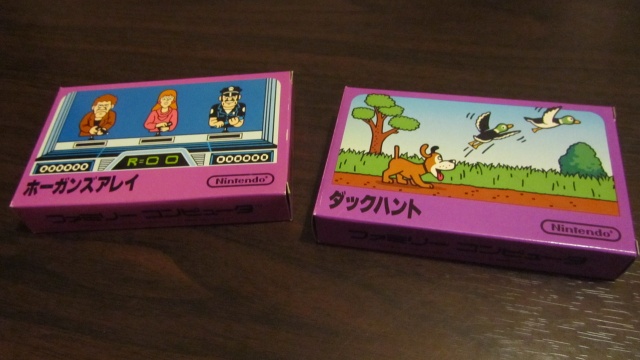 Take a look at these two games here. Go ahead, check them out! We have Hogan's Alley there on the left, and Duck Hunt on the right. Can you see any differences between them? I mean sure, Hogan's Alley has this strangely happy-lookin' cop holding a standard issue blue hippie-beater, and Duck Hunt has the goddamned hunting dog there looking way cuter than he ever does in the actual game, they are different games yeah yeah. But really look at them!

Despite all the comments you could make about the slightly different purple tones, the vibrant quality of the printing, or the glossiness of the boxes, the one thing you'd probably never ever figure out, even with the things right there in your hands, is that Hogan's Alley is "new," and Duck Hunt is not new. How do I know? Well, I don't know exactly. When I bought them, I was told they were new. They sure look new! But I opened Duck Hunt to look at the manual, so I know it's not new anymore. I never opened Hogan's Alley! So it must be new. If you didn't know if it was new or not, and I told you Duck Hunt was new, would you believe me? You'd probably have to just take my word for it. And why is that?

Well, mostly because Famicom games were never sold factory sealed. Ironically, one of the only ways you can tell if a Famicom game is potentially new is by opening it, making it no longer new! A "dead stock" brand new original series Famicom game from Nintendo, aside from having not a single contact pin scrape on its bottom contacts from the cartridge connector, is inserted into the box in its plastic bag, label facing the front, with its instruction manual cover facing out, upside down, behind the cartridge, tucked behind the plastic flap of the baggie. This is secret forbidden knowledge I am sharing here! I know this only from having opened a few "new" original series Famicom games in my time, much to the certain chagrin of psychotic collectors who do not actually play the games they buy.

Famicom Disk System games are a little easier to identify as either new or not new, because they have a special little Disk-kun sticker on the back of their soft plastic boxes. A never-opened game's sticker is just plain silver, while a sticker that has been pulled off will leave a little pattern of "VOID" marks on the box from the sticker's backing.

But even these things though aren't always a 100% guarantee. In my time I've occasionally seen for sale original factory sheets of the Disk-kun stickers that unscrupulous resellers could stick onto a nicely-cleaned plastic box to make it look brand new. I've also seen Disk System games that, surely having been sitting around for over 25 years in many cases, have had their stickers suffer the perils of age and simply "come unstuck," leaving no trace of the VOID pattern when they're gently pulled back. Unless the buyer, who pays a not-insignificant price premium for a sealed game, opens up their brand new game to check the placement and presence of the little pink warning slip or any other pack-ins (like Konami's special trading cards), they, just as with an original Famicom game, would have no easy way of knowing for sure if the game really is new or not.

The thing is that ultimately, for some games, it's likely that not a single unopened copy even exists anymore. Certain games which already command high prices even in average condition can inflate to unheard of amounts merely on the wings of collectors chasing the most perfect, optimal condition games they can find. Put a couple wrinkles in the box and you'll take it for a massively reduced price.

And yet, despite this uncertainty, games that go up for sale as "new" routinely command massive price increases over games that are merely sold as "complete with box and manual." Just last month, a particular seller offloaded hundreds of games that were sold as completely new, reportedly pulled out of storage after having been bought en masse from a toy store that went out of business and sold its entire stock in the mid-1990s. You can see one of them above, a "brand new" Donkey Kong, one of the first three games ever released for the Famicom by Nintendo (along with Donkey Kong Jr. and Popeye), selling for 15,000 yen, about $190 today. Last week, I purchased an average-condition example of this same game, boxed, with the manual, for 1500 yen, a tenth of the price. You can see the two auction pictures next to each other below, the new one on the left. There's obviously some lighting differences here, and of course the cheaper one shows its age, but is that condition difference worth another 13,500 yen? To some people, yep—despite no actual guarantee or proof of its pedigree.

What it comes down to is that in many cases, if it looks good enough to be new, it's new! And it's not like anyone who pays 15,000 yen for a brand new game is ever going to open it up to find out. Except me, I would totally do that, cause I like to play the games I buy. Also, Hogan's Alley is rad. 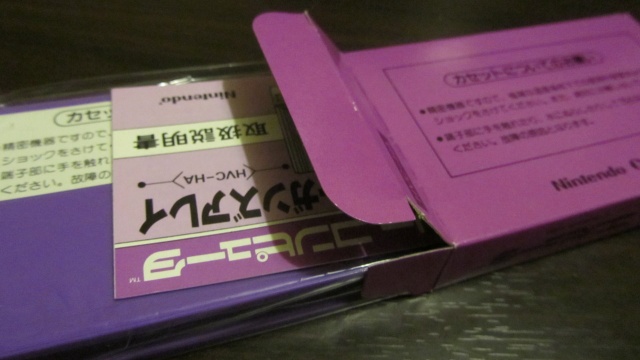