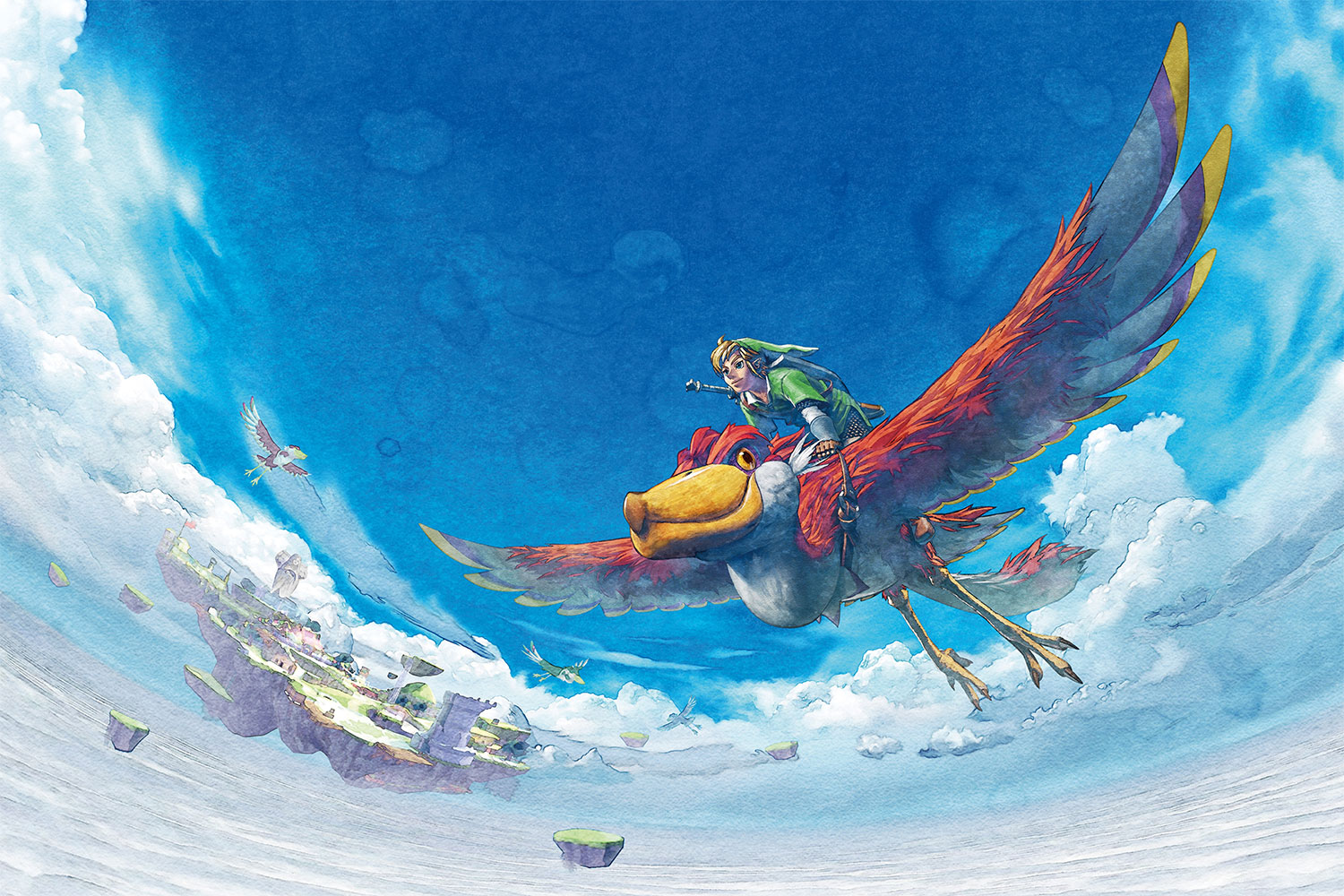 How do you make a sequel to Breath of the Wild and channel even an ounce of the "wow oh gosh" the first game had?  This kind of systems-driven open world with unprecedented freedom in its traversal, you can't just throw in "more systems" and "more world" and achieve that kind of impact.  But if we distill the game's primary message to one of "freedom," there's a natural next step: put that fancy boy in the sky.

This wouldn't be the first time the series has dabbled with flight, obviously.  Skyward Sword's overworld was a giant playground for Link to flap around in on the back of his own oversized shoebill.  It was really a glorified hub area, though, and as rad as it felt to fly through it, it was mostly just an exercise in point-A to point-B before you hopped back down to Hyrule.  It's due for a proper second attempt.

Imagine a Loftwing that works like a BotW horse.  Whistle it on over, and it alights and bows its head.  Hop on and get flappin!  Through that ravine, up to that mountain, into the clouds.  The thrill of flight, but in a densely detailed world instead of a barren cloudscape with little to actually do.

Of course, flight could provide straight-line solutions to previously complicated traversal challenges.  What's the point of a highly designed world when you can just fly over it?  Well, let's tweak our image a bit here.  Instead of a Loftwing, how about we slap some wings on a horse.  Zelda's long-lost pegasus, her bosom pal, trapped in horse hell by Malanya the horse god and finally set free.  Now you're doing your horse thing, riding around, and then WOOSH you take to the air but... your pegasus stamina meter quickly winds down, forcing a landing.  The classic BotW limitation, reimagined.  You can make brief vertical jaunts but nothing crazy enough to actually skip over entire terrains.  But find a magic carrot or some bullshit and zow, your stamina goes up a bit, eventually you can fly over everything, but not until you've earned it by working your way through the normal way first.

Insomuch as the world of Breath of the Wild was architected around the ability to climb, though, I can't imagine Nintendo would introduce so significant a mechanic as flight without similarly building the world around it.  If all you can do is jump over things on the ground it's not much more than a shortcut that speeds up traditional traversal.  If you're introducing free movement along the y-axis, you need to design the world along it as well.  I think Breath of the Wild's sequel should be a sphere. 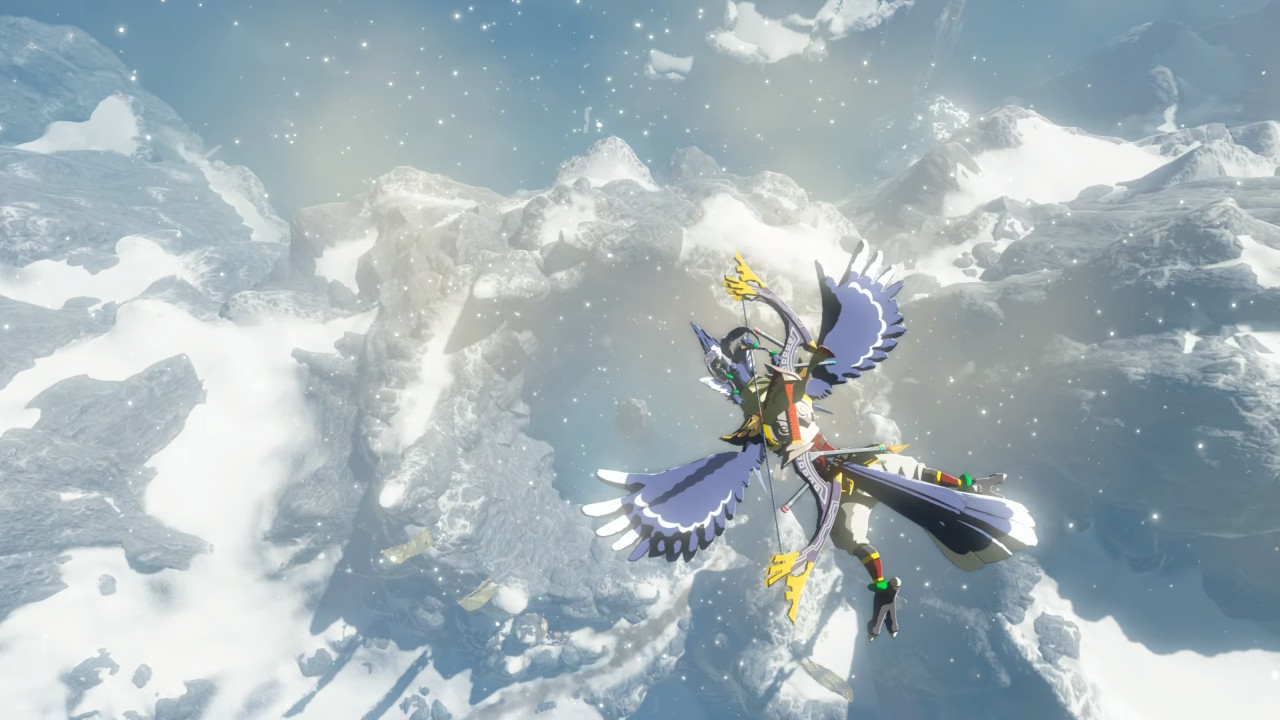 A flat world with various elevations really doesn't take advantage of flight in the way a huge sea of floating islands does.  I want to be able to leave the starting zone not just in any compass direction like the plateau in BotW, but by soaring upwards or delving deep.  Maybe you unlock infinite free flight at some point, but early on you're making controled jaunts to rocky outcroppings you can see jutting out of the omnipresent clouds, taking step after step into the unknown.

On the surface this isn't that different from Skyward Sword, you could certainly fly up and down in Skyloft.  But I'm talking about being able to go as far up and down as you can out and about.  Miles and miles of verticality, entire towns and civilizations in the far flung heavens or the murky depths.  Maybe the normal people of this world occupy a tight verticality, but there are unknown realms beyond those forboding cumulonimbus, or within that vortex of lightning and jagged rock.  Maybe you have to dogfight with bokoblins on dragons, and befriend entire pods of sub-atmospheric orca.

Fevered pipe dream?  Likely!  But not impossible!!!  We all saw that BotW2 trailer, Hyrule Castle definitely started to rise into the air at the end.  Will it continue to rise, ending up in a fully-realized Hyrule-sized rendition of Skyloft, stretching out in all three dimensions?  Probably not!  But it could!!!  And as much as I'm sure I'll adore whatever we end up getting, I've certainly poisoned myself against anything that doesn't involve piloting an air-horse in a fight against lakitu-styled gorons throwing rocks out of little clouds.