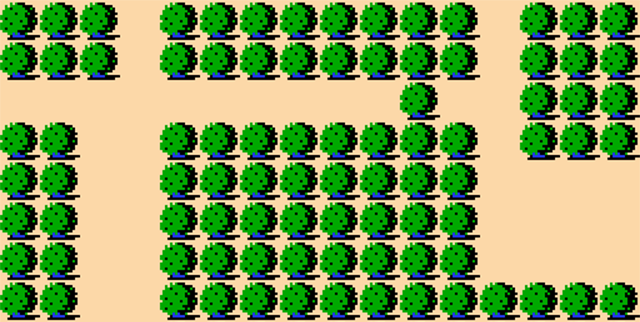 I've been playing through The Legend of Zelda, the first one, on the 3DS over the past few days, and it's got me thinking. Obviously this game is "too hard." Left on your own, in a void with no human contact, and only the ROM and no previous experience with it, I can't imagine the game is beatable. Or at least, not beatable without completely losing your mind.

I mean this is not my first time playing Zelda 1. But my first time was not as a child, in front of a flickering CRT. It was as an adult, with the full support network of the Internet available at every turn. Now I'm not really one who likes using guides to figure shit out. In fact I abhor it except for postgame content! But for this particular game you almost have to use a guide, unless you have three months of grueling unfun time to spare.

So I am thinking about what went through the minds at Nintendo when they made this game. I can think of only two possibilities. One, they wanted kids to play these games for as long as possible, so it was made to be obtuse and horrifying so those kids would come back to it, day after day, re-burning and re-bombing every single square on the overworld until something would finally give. "Welp, don't know what to do again, back to burning every sprite in the world." Kids are dumb, they don't know they're being abused.

Two, they expected word to travel. Maybe someone would stumble upon a secret, either via attrition or by buying a guide. Maybe they would call the Nintendo Power hotline! But one way or another, one kid would figure it out, and it would spread throughout the schoolyard. A primitive form of viral networking would move the data throughout the real world, in hushed tones, and that kid stuck looking for the eighth dungeon for months would follow the rumors, and GOOD LORD, there it is. "Wait didn't I already try that, oh son of a bitch the fire went too far that time."

It was probably a combination of the two. What that means, though, is that it's a game that you can't really play "the way it was intended" any more. Consulting the Internet is almost too easy, and if you sneak over into the neighborhood schoolyard and whisper your questions into the delicate ears of the budding youth, you may find yourself more concerned with breaking out of your new home, prison, than locating Dungeon 8.

The point is, don't feel too bad when you cheat your way through it. Well, maybe feel a little bit bad, depending on how much you cheat. Zelda 1 is a game for people that already hate themselves anyway, though, so I'm sure you can handle it.