View in legacy (desktop) mode
However silly we think all of these rumors about Nintendo's next console may be, it's probably fair to believe the single most prevalent and uncontested item: there's gonna be a screen on that there controller. Maybe it's huge, maybe it's tiny, maybe it's haptic, maybe it's a fruit roll-up, who knows. But let's just go ahead and believe it's there, cause I can't really write any of this if it's not.

In a recent financial briefing, Satoru Iwata said the following when challenged to make good on his promise that the Wii was supposed to "change the relationship between TV and games":


"In particular with Wii, for example, the challenge with start-up time when changing channels, or the current situation where we cannot automatically turn on Wii, turn on the television and change the input mode in the event that Wii receives a message, have led to challenges where we had difficulty having the users use Wii in the way we had intended."
I have mused in the past about how the Wii, or a non-specific future console, could have better integrated with a television. The idea was that you'd have your cable jack running directly into the console, and it would serve as your front-end for all television operation. This way "TV channels" and "Wii channels" would be accessible via the same interface and given equal billing, which could significantly lower the barrier of entry Iwata seems to be describing.

That said, it still doesn't turn your TV on for you. These days when the Wii disk drive starts glowing, do you still find yourself excited to see what's on there? Or do you know it'll just be another firmware update to delete homebrew apps? I think the honeymoon is over for that particular notification paradigm. The 3DS can probably continue to get away with it since all you have to do is crack the thing open to see what juicy morsels have arrived inside. For a console though you have to either turn everything on from scratch or, if you're like me, find the appropriate amount of mental energy necessary to pause your DVR and gingerly swap input devices using non-standard methods to make sure the cable box isn't turned off via some automatic suite of infrared commands. 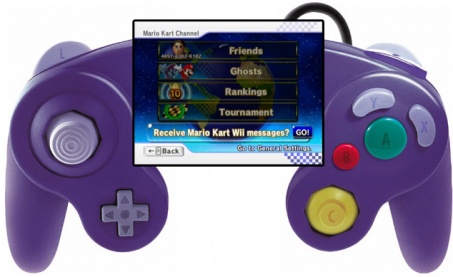 Cower before the sophistication of this mockup
Enter: a controller with a big fat screen on it. Let's assume for a moment that Nintendo's next console is low-power enough to beam certain amounts of functionality to this controller while sitting in a WiiConnect24-esque standby mode. Now the barrier to entry has been reduced to 3DS levels, if not even lower. Controller blinking? Pick it up and see what's new. Read the message that just arrived, hop over to the eShop, and queue up some new software to download. No need to turn on the TV, no need to swap inputs if you're already watching TV. But you know what, since you've been provided with information beyond "a light is blinking" without any real effort here, maybe that information has enticed you to switch over that TV anyway.

And that's the real innovation here. Sure there are gameplay possibilities for a controller screen, Dreamcast's VMU and the various iterations of the DS have illustrated a million of them already. If Iwata is concerned about breaking down the barrier between a gamer and actually switching his TV over to the console, though, this is a fabulous method. You can use the controller for those mundane actions like reading messages, shopping, or issuing trivial commands for more realtime gaming experiences. It's not about playing your console games in another room (I'd rather wait for the TV to be available than downsample and downscale the console experience anyway), it's about having zero-barrier entry for the basic firmware functionality.

Nintendo has toyed with this paradigm on the Wii already, in fact. The Wii Fit and Mario Kart Wii channels existed as lightweight front-ends for commonly performed tasks that don't require the booting up of the full piece of software. Something like the Mario Kart Wii channel in particular would transition famously to a controller-exclusive application. Lowering the barrier to entry even further, you can check on your friends' best times, be notified of new ghosts, or even receive race invites without having to turn on the TV. Just like with the channel as it currently exists, the data there is meant not only to inform but also to entice. It's much easier to want to boot up a game if you know what you're going to get ahead of time.

We've transitioned to a world where information is expected to come to you, rather than you having to search for it. Social networking updates stream to our phones, RSS feeds aggregate a billion sites in one place, and our 3DS's glow green when we've stolen the soul of a similarly-equipped passerby. This is admittedly all speculation here, but leveraging a tablet-esque controller screen for this kind of interaction could certainly qualify as "a new framework for a game system to be enjoyed at home," as Iwata so humbly puts it. I'll be awaiting the E3 reveal with bated breath.
view full archive