View in legacy (desktop) mode
Nintendo's newest upcoming system has become the first video game console to be entirely predicted by fans and journalists before ever actually being officially announced. Sources close to Nintendo told The Press early this morning that they were "thrilled" at the prescience of the world's clairvoyant writers, who are doing Nintendo "a great service" by using these skills in the field of low-paid, Internet game journalism instead of for personal or social gains.

The enormous feat of technologically engineering the system, which for marketability purposes has been dubbed the "N6 Next Hi-Fi HD" by various Internet students of advertising, began mere days ago, when one of these mysterious prophets bestowed upon the World Wide Web what Press analyst Chet Stetson has called "a revelatory morsel." The newest Nintendo system, it was decided, will "be powerful."

Bucking a consumer trend, another prophetic sibyl foretold Thursday that this system would be capable of outputting video to television sets in "high definition," separating it from the current non-high definition consumer device, the iCarly Television Games and Fun Remote Computer Game, which outputs only through the yellow RCA plug.

Citing to Press reporters a "desire to get in on it," one second-sighted telepath proclaimed only hours later that the system would indeed be backwards-compatible with older games, not unlike five of the six home consoles released in the last eleven years. "I just felt a desire to share my gifts with the world," the telepath said. "I couldn't just sit idly by while everyone else chomped at the bit, wondering what was next. Really, it was the absolute least that was possible, considering the massive size of my brain." 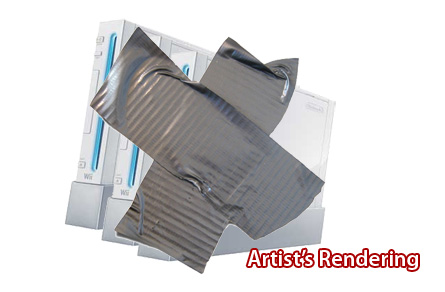 Even the staggering sagaciousness of the sorcerers who take up residence at a less-popular media outlet were quoted as having "received a dispatch from the Other World"—the newest system will have games developed for it by first- and third-parties, some of them "major." "The news that developers will program games for the system is frankly unprecedented," Stetson remarked. "This changes everything."

As the week progressed, the system began to take its final shape, based on the testimony of thousands of breathtaking Internet voodoo doctors from all over the world, who decided to grace humanity with their para-psychological divinations. By Saturday, however, the creativity of these paranormally gifted idea-fishermen seemed to wane, producing more jejune prognostications like that of an enormous screen, larger than a controller could physically contain, that receives wireless telecommunications from the home unit while being bordered by uncountable analog sticks and triggers.

Despite the disarmingly comprehensive and earth-shattering agency of these thaumaturgic mentalists, there are somehow still details that are unknown, hinted at only with the cryptic phrase "and other surprises," which is usually followed in text with a ":)" smiley emoticon.

Nintendo is expected to fully confirm every one of these design decisions at this year's Electronic Entertainment Expo, including a controller that is exclusively a touch screen but also has multiple buttons, Blu-ray and DVD support which simultaneously does and does not support movie playback, and graphical capability that is less than, equal to, superior to, and also vastly superior to those produced by their competitors.

Any discrepancies between the official announcement and the stunning proclamations of the ensorcelled will be quietly dismissed with mere hand motions, predict tea-leaf readers at The Press.
view full archive