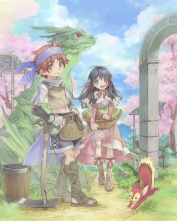 If you're a regular visitor to the site, you'll know that I'm a little obsessed with the Rune Factory series. I took a chance on the original Rune Factory quite some time ago, despite having no history with Harvest Moon, and found myself captivated by the game. Something about blending the farm-management gameplay of Harvest Moon with the trappings of an action RPG just clicked, and I found myself not just playing the main game, but also working down several of the game's optional paths to creating Ã¼ber-vegetables or forging all sorts of weapons, pursing the kinds of things I rarely pursue these days—it became an obsession.

Rune Factory 2 promises to be all that only bigger and better, and when the opportunity presented itself to ask questions of Natsume's Graham Markay, who knows quite a bit about the new title, I jumped—needless to say. This interview is geared toward people who are wondering what's new in the sequel; newbies might want to read my series love piece first.


So, Rune Factory 2 is coming! I take it you were happy with how well the original did, to be bringing the sequel stateside?
Graham Markay, Vice President-Operations, Natsume:We were very happy with how well the first Rune Factory was received. Everyone seemed to really enjoy the unique blend of a Harvest Moon game and a fantasy RPG. That being said, Rune Factory 2 builds on what made the first title successful and expands the series by offering beautiful graphics, innovative touch screen controls, easy-to-use menus, and an all-new, multigenerational storyline.
Let's start with the story, then: tell us how this game ties in to the old one.
Markay:Rune Factory 2 takes place in the same world many years later. There is a returning character from Rune Factory, and, throughout the game, there is mention of what happened with the first story. However, it is not necessary to have played the first game to fully enjoy the sequel. Rune Factory 2's story will span two generations; players begin the game as Kyle, and then eventually play the role of Kyle's child.
Some of us were great fans of the original Rune Factory, but we found it unwieldy at times. We hear that Rune Factory 2 plays much more smoothly, with improvements to the menu systems and controls. Can you speak to that?
Markay: 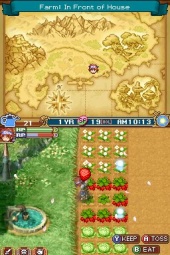 There is a new quick-select menu system that allows players to quickly and easily equip items, tools, weapons, and spells. It makes it very easy to switch weapons and spells during battle, and gives you quick access to all of your tools when farming without having to go into a menu screen. The new quick-select menu system can be used via touch screen or by a combination of buttons, whichever is more comfortable. You can use either the touch screen or the directional pad for the character's movement and menu navigation, as well.

One of most interesting new features I've heard about was the training dojo, for combat training. Can you explain how that works, as well as the schools for learning other skills?
Markay:The main feature of the training dojo is the ability to unlock Skill Seals. Skill Seals are another new feature in Rune Factory 2, and basically serve as special attacks that allow you to do even more damage to your enemies! There are Skill Seals for every weapon type in the game, so players will definitely want to use the dojo to their advantage.